The Drakensberg to Cape Town

The final part of the trip was much less about birding and game watching, and more a bit of a road trip and city break. Given the biodiversity and wealth of wildlife in South Africa, it was impossible to get away from great birds, and I couldn't resist the odd stop here and there.

After leaving Hluhluwe, we headed for Harrismith where I'd spent 3 months back in 2008. This took us not too far away from the forest board walk in Eshowe, so we stopped there to break up the journey. Unfortunately we were there mid-morning on a hot day, with some sort of school event making a racket nearby, so needless to say it wasn't at it's best. Highlights included Narina trogon, Lemon dove and Chorister robin chat.

After a pretty long drive, with only an always disappointing Wimpy burger for relief, we were grateful to be arriving in Harrismith with a few hours of daylight left. Plans were made with Michael and Kate (with whom we were staying) to head  out to Clarens for dinner, which would take us through Golden Gate NP, a really spectacular place around sunset, especially on the plains where large numbers of antelope gather in late evening
.

After a lovely meal, we decided that we would stay in Harrismith a second night, so as to give ourselves a day to do some walking in the Drakensberg the next day. The plan was to drive up to the Sentinel car park, and try and walk up to Mont aux Sources plateau. Unfortunately, the Micra let us down (or my courage did), and I couldn't get it up the extremely rugged track to the car park. Luckily the tarmac lasted far enough to get to the Witsieshoek Hotel, where the hotel manager puts out bones to feed the Lammergeier. They had already been fed when we arrived, but the manager kindly agreed to put more bones out, whilst we got stuck in to some apple crumble in the hotel restaurant. The birds arrived so quickly I had to dash out and abandon mine, but they did give stunning views, better than any pudding!

We then headed round to Golden Gate to go walking, and to have a look in the vulture hide. There weren't any vultures but a few jackals were scavenging around the carcasses. 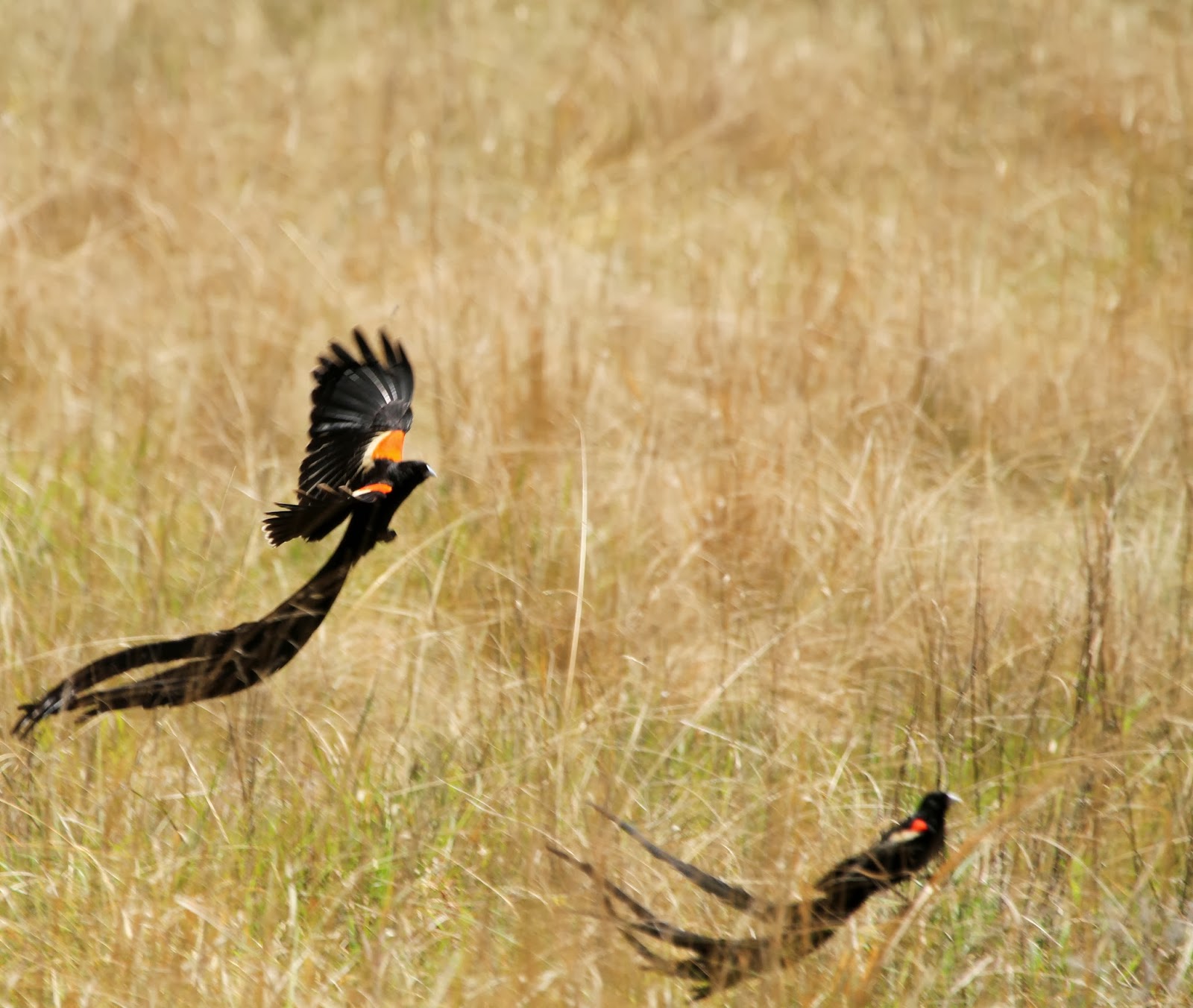 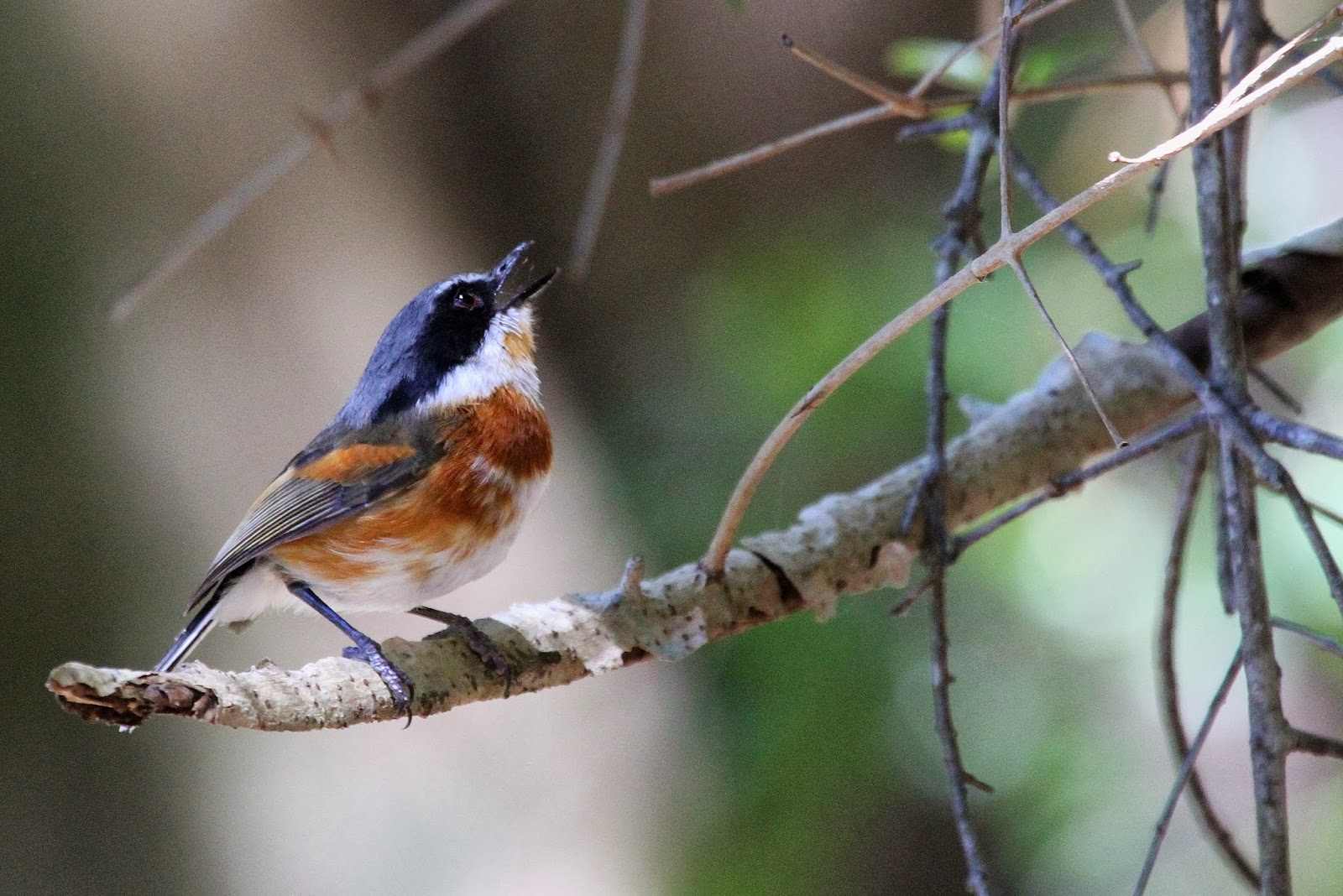 Posted by Oliver Metcalf at 15:14 No comments:

From Kruger we headed south through Swaziland to St.Lucia and iSamangaliso Wetlands Park. This area is well known for having high biodiversity, and several endemic species of birds that specialise in the coastal sand forest that dominate the local dune habitat.

Unfortunately during our stay the winds were very strong, which put paid to our plans to go snorkelling, and the exorbitant prices of whale-watching trips and nocturnal trips to watch turtles coming up on to the beaches proved to be prohibitive, so instead I focussed my attention on the patch of sand forest to the south of St.Lucia, just behind our accommodation, whilst Cat had a more relaxing period after a series of 4am starts in Kruger.


All of the above were seen along a couple of kilometre long trail around a tiny patch of sand forest behind our accommodation!

We also headed out to Cape Vidal, driving through the game park to get there, seeing more rhino and several species of antelope, but not adding any species of mammal we hadn't seen in Kruger. Birding was again good:


Cape Vidal itself was very windy, but we did get views of Samango monkey, and better views of Yellow-rumped tinkerbirds and White-eared barbets than I'd managed in St.Lucia 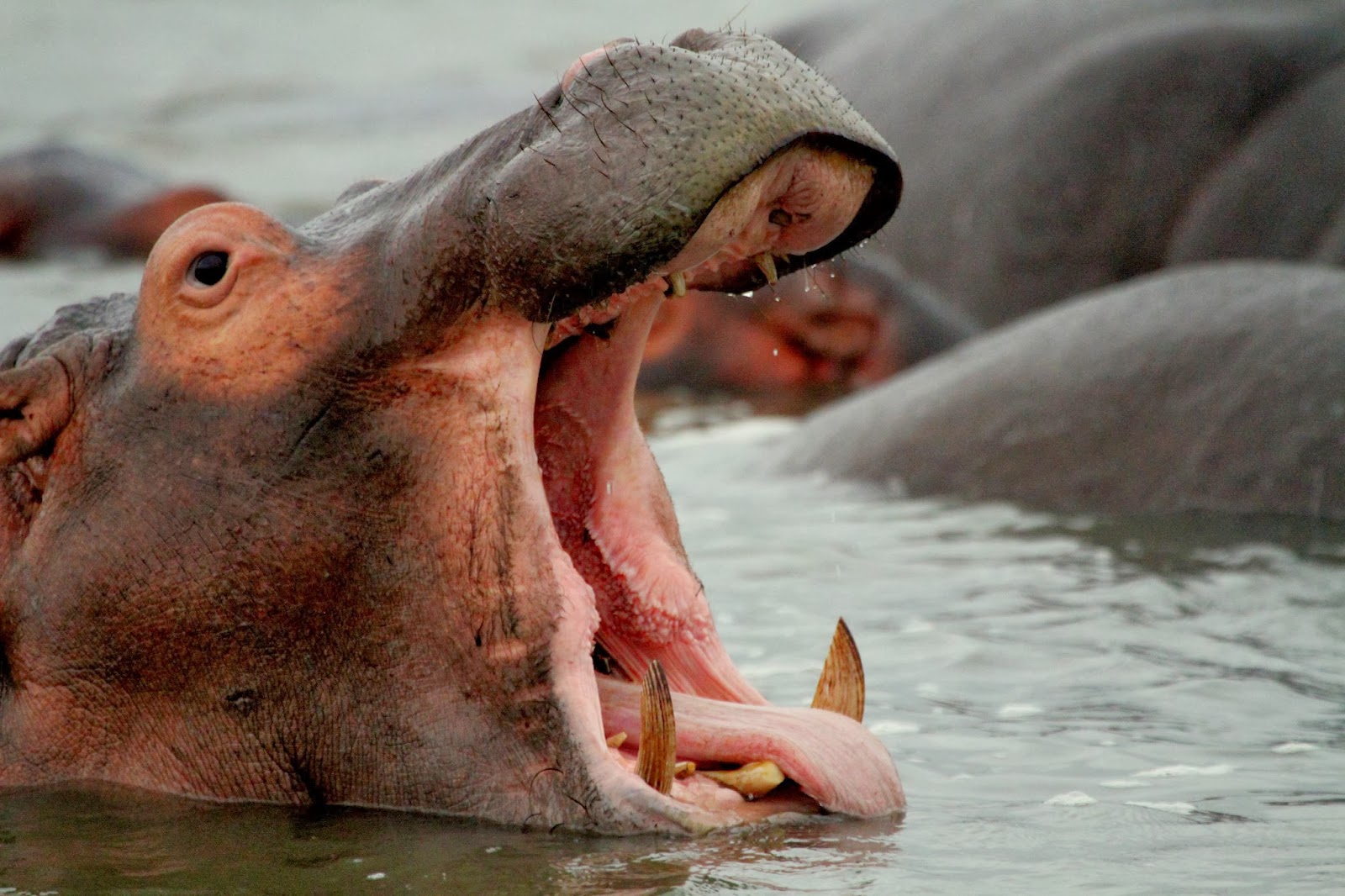 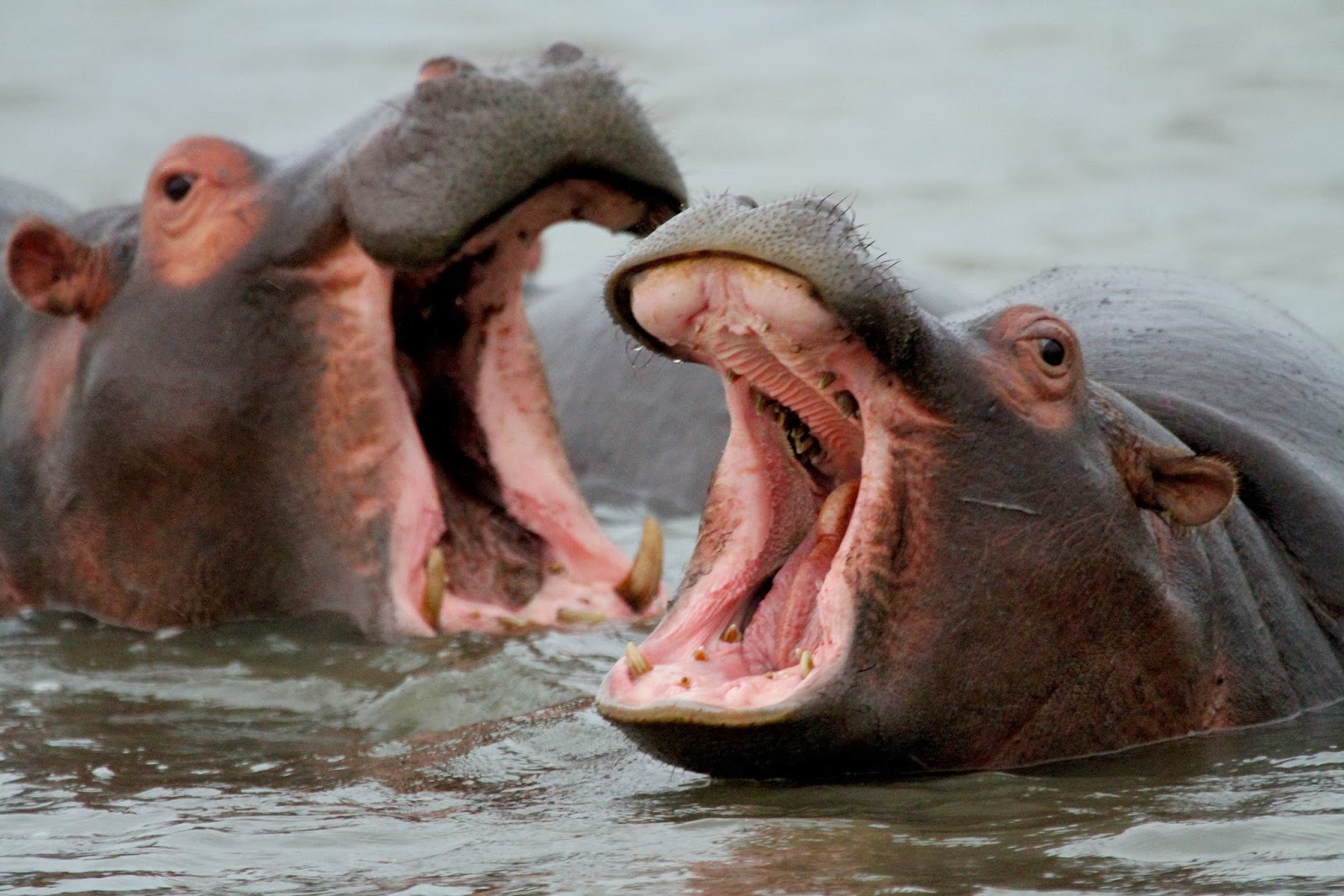 Next up was a couple of days in Hluhluwe-Imfolozi game reserve, the reserve where all of South Africa's white rhinos originate from. It was also my last chance to see my main mammal target f the trip, African wild dog, but after not having had a sniff in Kruger, and knowing very little about the pack(s) in Imfolozi, my hopes weren't high.

We arrived at the gate at about 8am, slightly later than planned. When we went to pay for entry, we were greeted with the incredible news that one of the wild dog packs were jogging along the road on the Imfolozi side of the reserve, about 15 km to the south! Needless to say we jumped back in the car, and shot past herds of elephant, family groups of rhino and various antelope to try and get there before the dogs left the road. As we rounded a steep bend we were greeted with this sight:

Two wild dogs happily jogging down the centre of the road towards us, clearly in travelling rather than hunting mode, but still! In less than a minute they'd loped out of sight, leaving me elated, We headed on the the campsite in Imfolozi to have breakfast, and watch a massive warthog rummage through a compost heap outside the toilet block. On our way back, when we thought it couldn't get any better, we bumped into the rest of the pack, 16 wild dogs lounging and napping under the shade of one large tree, right on the roadside. Absolutey incredible, and we spent the next couple of hours watching them, but eventually the heat of the day and desire to get out of the car got the better of us, and we headed up to Hluhluhwe and Hilltop camp for lunch, passing some huge buffalo herds and lots of giraffe on the way. 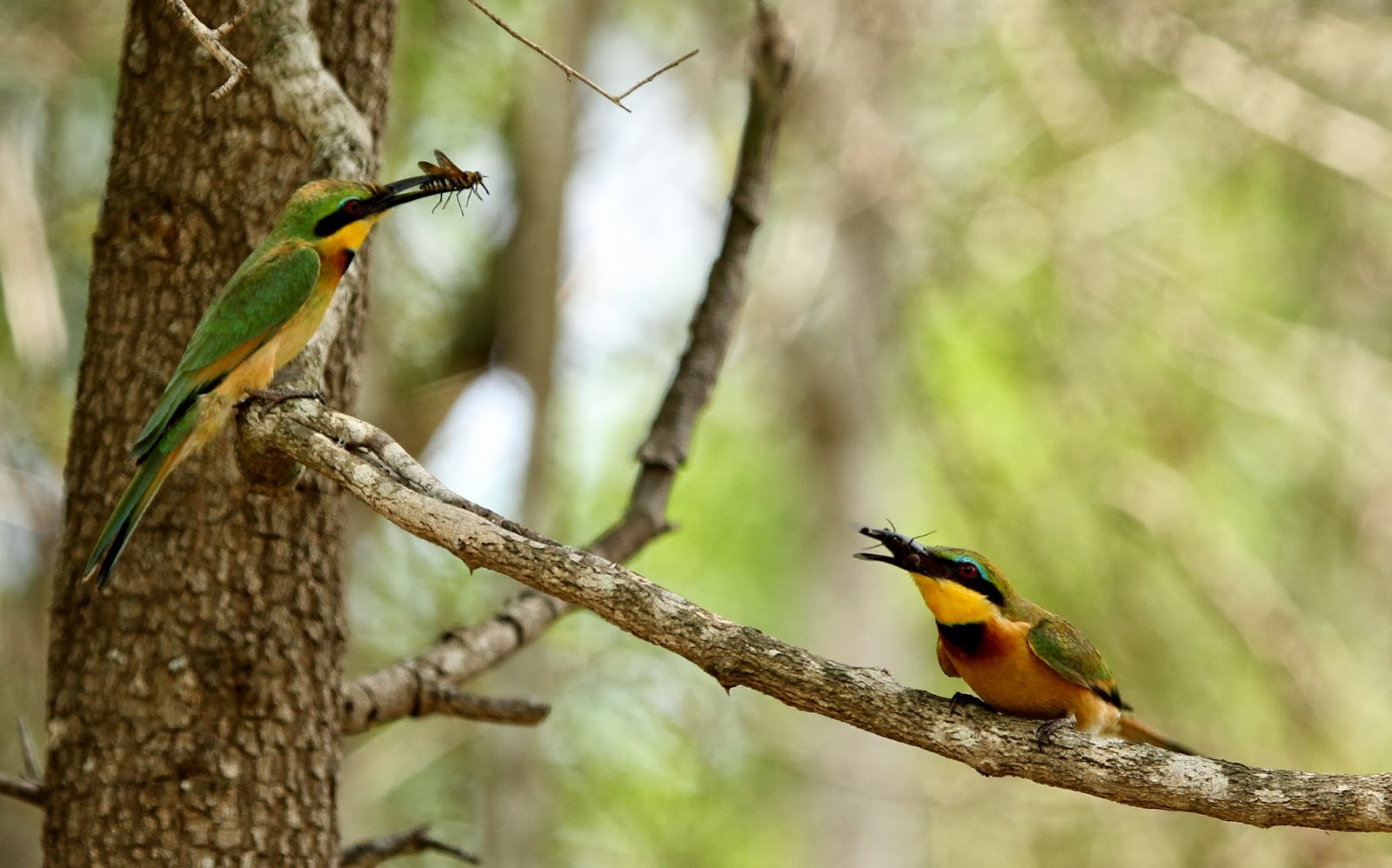 After lunch and a stroll around Hilltop camp, we headed back out in the evening. The density of white rhinos in the park is quite incredible, we must have seen over twenty in a couple of hours. After arriving back at the camp after dark, we took stock of our situation. We had seen all of the large mammals we could realistically hope to, and we had an extremely long drive down to Cape Town stretching ahead of us over the next few days, so we took the reluctant decision to sacrifice a second night in the game reserve, and instead depart the next morning for the Drakensberg to break up the driving. 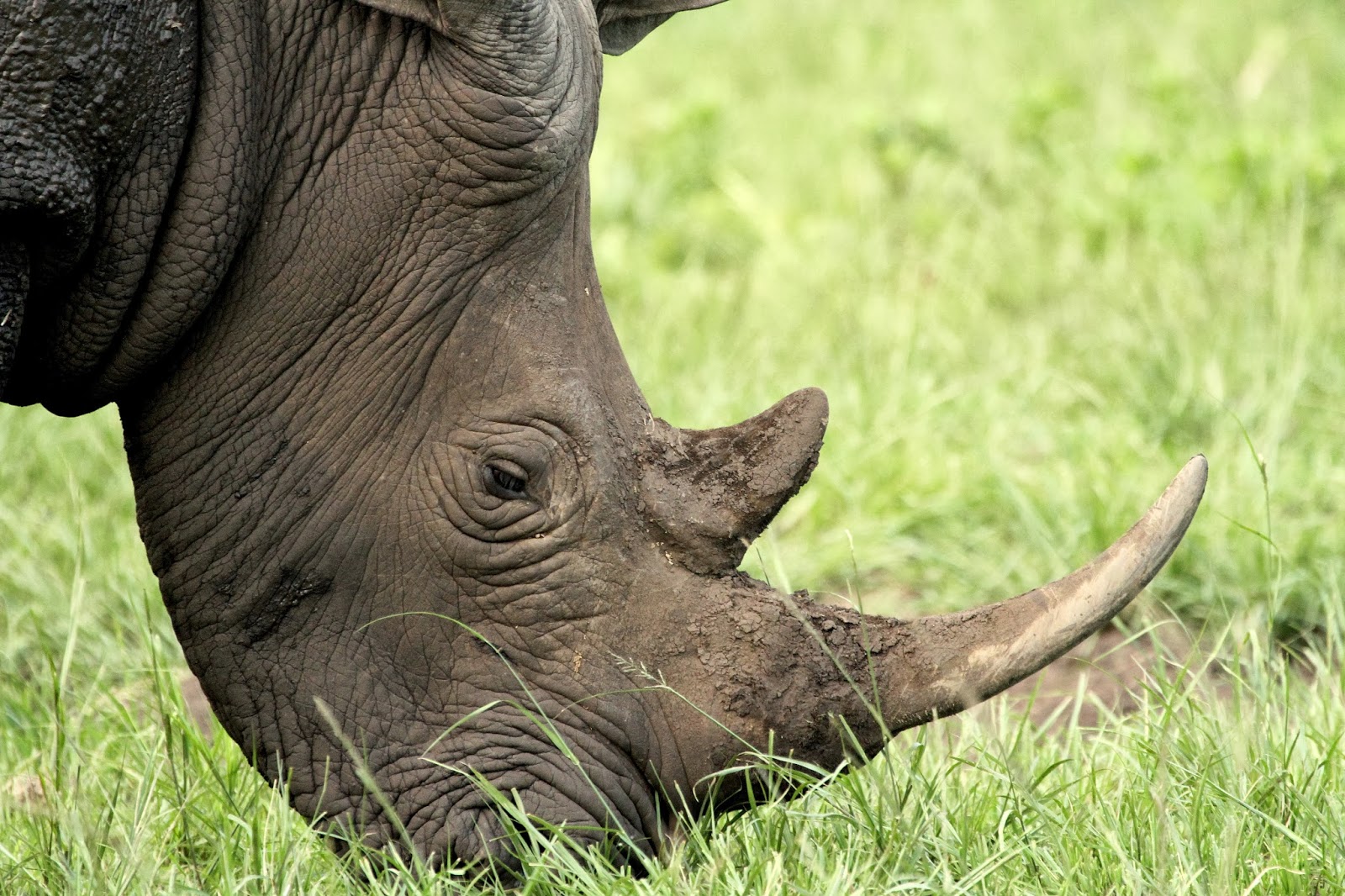 Posted by Oliver Metcalf at 06:00 No comments: