I had heard how good spring trips to Israel could be, so when Tim Jones discussed the possibility of going out there for ten days in late March and early April, I decided to grasp the opportunity. As well as Tim, Rael Butcher and James Shergold came along, and we found pretty cheap flights in to Tel Aviv on the 23rd. We booked accommodation in a cheap hostel in Eilat, and based ourselves there throughout the trip.

We arrived too late to do any birding on 23rd, and just drove to Eilat. The 24th saw myself, James and Tim head to Holland Park early morning to try and catch up with a reported Black bush robin, but unfortunately no-one knew anything about it, and despite extensive searching. That said, Tim and James had wracked up half a dozen lifers before I'd even got my scope out of it's case, and after a few hours, I'd seen a fair few new birds myself. Holland Park was a fantastic start, absolutely dripping with migrants as well as some of the resident specialities.

As we were leaving we bumoed into Paul French, who told us he'd just found a Semi-collared flycatcher in Ofira park, right in the centre of Eilat, so we nipped round to have a look

The rest of the day was less succesful, as we got our bearings, tried out a few places and had a few trips to North Beach, where there were plenty of white-eyed gulls, terns but no sign of the brown booby.

The next morning we left our hostel at dawn to do some early morning birding in the Eilat mountains before the raptors got started. We came across this female Hooded wheatear, as well as a couple of more flighty males, as well as several White-crowned black wheatears

By mid-morning raptors had started to stream over the Eilat mountains, with penty of Steppe eagles, 1000s of Steppe buzzards, Egyptian vultures, Pallid harrier and others. Hopefully I will do a seperate blog post with some raptor photos soon.

We spent the afternoon birding around Km20 and the IRBC, getting highlights like Namaqua dove and Pallas's gull.

The next morning saw a very early start as we made for the vulture feeding station near S'de Boker. No sign of the hoped for hyaenas, but a pair of distant wolves made up for it, as well as flyover Richard's pipit and spotted sandgrouse and an impressive number of vultures first thing.

Unfortunately, we stayed for  little too long, and missed our chance to see Mcqueen's bustards displaying in the early morning, and there was no sign of tghem in the increasing mid-morning temperatures. Sandgrouse were also notably absent around the sewage pools at Nizzana, but there was still some outstanding desert birding to be had, including one wadi absolutely stuffed with migrants. 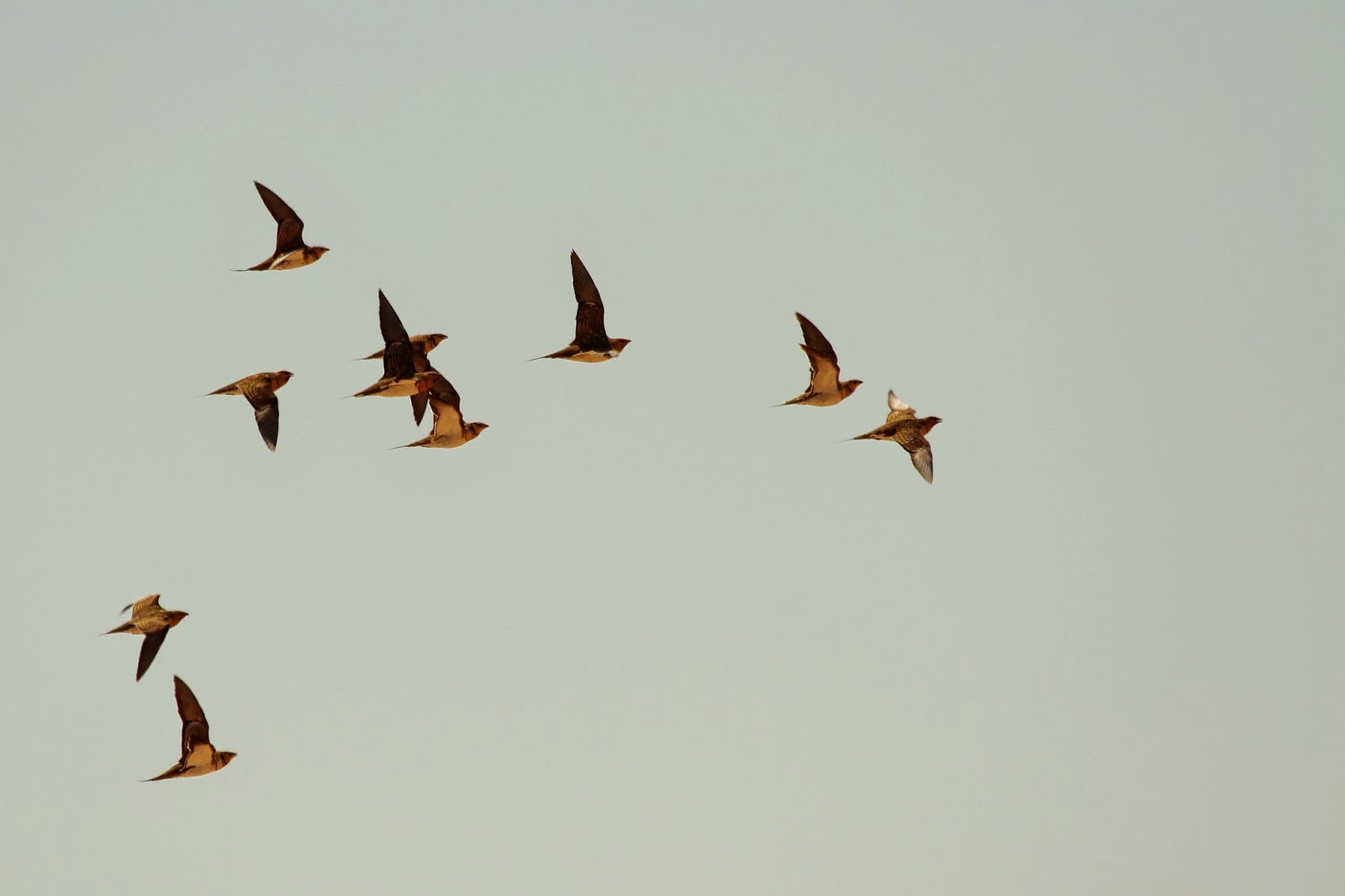 We decided to wait it out until the evening when the bustards would be back out displaying again, but whilst we were escaping the midday heat in a nearby shack/cafe, news came through of a Pied bushchat back at Neot Samadar. We decided to dash back for it, and leave the bustards for another day. The drive back was somewhat eventful, whilst James slept, myself and Tim managed to count 300+ painted ladies crossing north over the road in just 15 minutes whilst the road was running east-west. Truly incredible, although there seemed to be an even higher density moving on our final day further north in Tel Aviv. Certainly our windscreen was constantly smeared with the unfortunate ones.
We arrived at Neot Samaderto find the Pied Bushchat showing well, a cracking male... 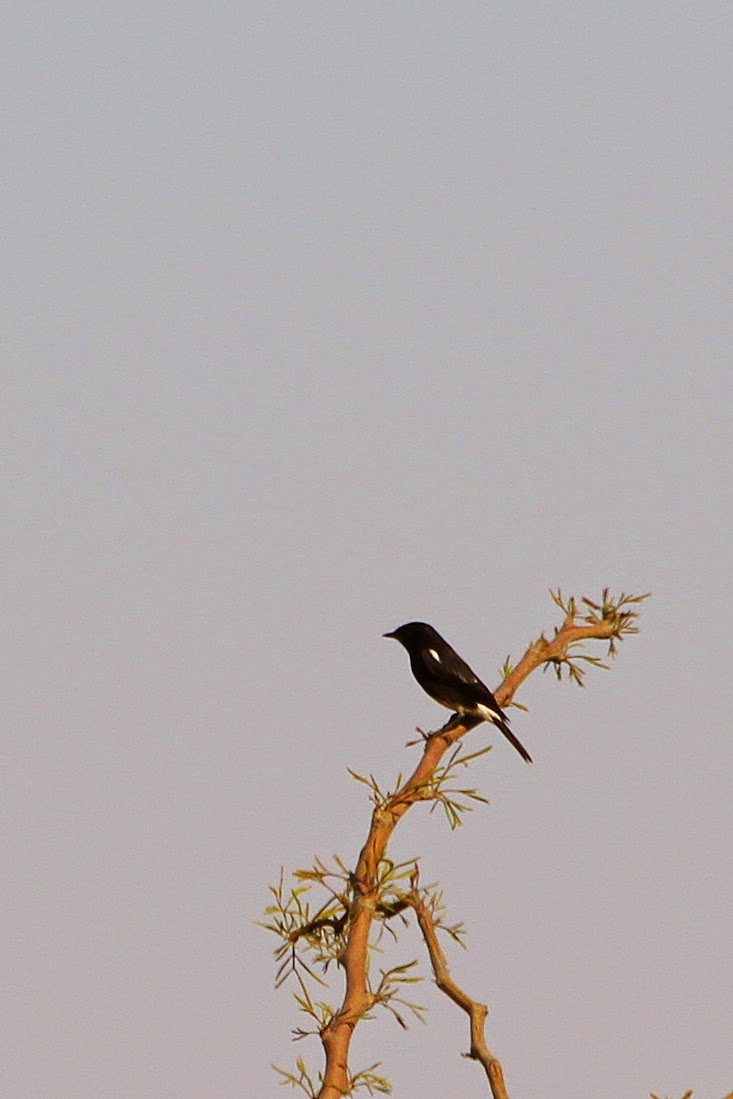 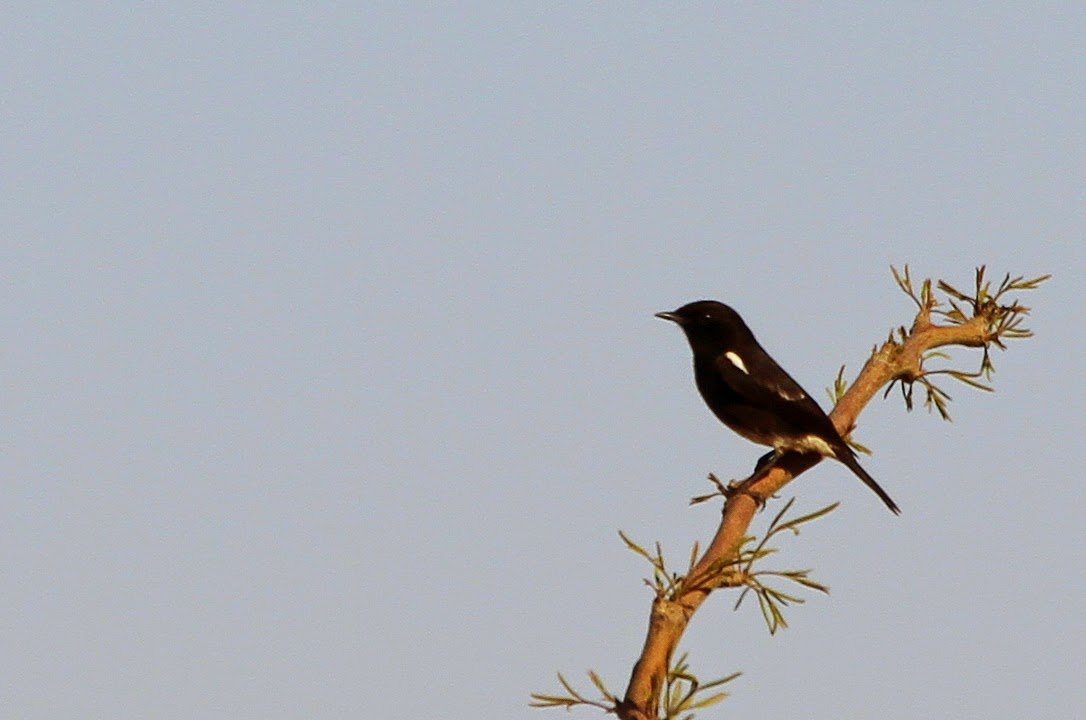 More highlights to follow.
Posted by Oliver Metcalf at 08:51